Phil Thompson and some of his family - Great Grandparents Rights 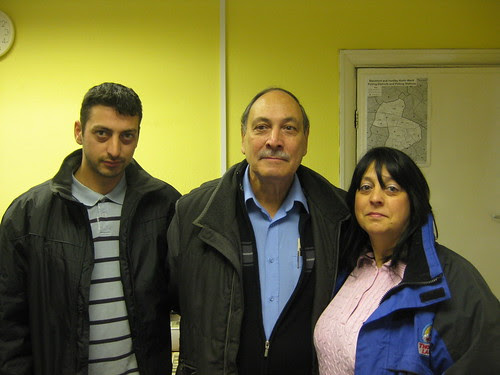 The picture is of Phil O Gorman, his grandfather Phil Thompson and Sara O Gorman his mother.

Clayton v Clayton changed the law so that identifying parties to a Family Court case subsequent to the case is not contempt of Court. I will, however, not identify the Children in respect of this case.

On 9th May 2006 after a sequence of events that completely confused the family the three children were forcibly adopted by a decision of the magistrates in Walsall Family Proceedings Court.

Since that point the Family have been trying to find out what happened and why the children were adopted and what is now happening to the children. They first contacted me in 2007.

It has not been possible to obtain any detailed reasoning as to why the children were removed from the family. A letter was written on 2nd November 2008 to the Courts and a response on 13th November 2008 indicates that the file has been lost.

Attempts have also been made to obtain a copy of the file from the solicitors without any success. Without a judgment it has been impossible to make any application to the courts for an appeal as to the lawfulness of the decision.

Attempts have also been made to identify what happened in the lower courts, but without success apart from some very vague comments from the local authority.

Phil, therefore, applied for contact with his great grandchildren at the Black Country Family Courts. This application was rejected administratively.

An attempt to appeal the administrative rejection was made to the Court of Appeal on 8th December 2008. This, however, was also administratively rejected.

Today after some more work they posted an application to the European Court of Human Rights. This raises a number of interesting questions not least that as to whether grandparents and/or great grandparents have any rights.

Grandparents Apart UK said…
I have 2 cases like this in Glasgow. No reason was given for removing the children from the mothers and they are being groomed for adoption. The mothers contact is being cut to two months.
8:36 pm