Highlights from the World Toilet Summit in Belfast

September 28, 2005
The previous summit was in Beijing and most have been held in the Far East. Although Singapore has always taken such issues seriously even in Hong Kong there was a lot of sniggering about toilets until 2003 when SARS came along.

When people started dying as a result of an absence of hygiene then public sanitation was taken more seriously.

There are lots of opportunities for scatalogical humour, but what is important is that people take the underlying issues seriously even if people laugh about the issue to start out with.

MRSA is an anti-biotic resistant bacteria. There are two reasons why we are developing bacteria that are anti-biotic resistant. One is the overprescription of anti-biotics - such as for viral infections and the second is the reliance on cure rather than prevention. MRSA kills people. One way of preventing MRSA is better hygiene. Public Sanitation was one of the most important steps to be taken to reduce deaths from infection. It remains that about half of the children that die in the developing world die as a result in part of bad sanitation. Boring, but true. If we want to Make Poverty History we need to prevent problems rather than cure them.

If (and it is a reasonably big if) something like Bird Flu mutates into something which can be carried from human to human then suddenly there will be a big shift into concern about hygiene in the UK.

Before we go onto the fun of the photos of the highlights of the WTS it is worth remembering that many people have to plan their lives on the basis of toilet facilities. We are gradually getting a more squalid and unhygienic public environment with the consequential damage to public health. The survey that the BTA and I have been doing has found in the initial analysis a reduction of about 20% in the number of public toilets available. Only 24% of authorities have been analysed as yet.

Those photos. I am sure you want to see the photos. So here they are: 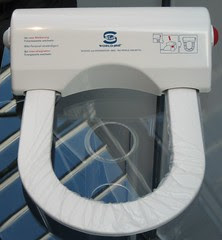 The WorldSeat
One change for greater hygiene is toilet seats which have their own coverings. This, of course, is not as good as disinfectant in the bowl, but superfically it looks nicer. 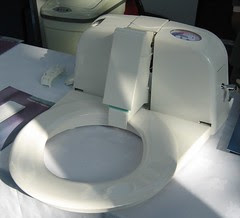 Alternatively the seat can be cleaned there and then. Still not as effective as disinfectant. 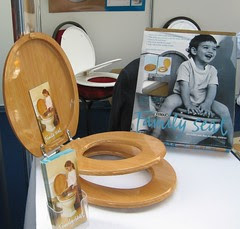 The Family Seat is a practical solution to the ultimate nightmare of many toddlers.

India takes on allcomers with this public toilet complex. 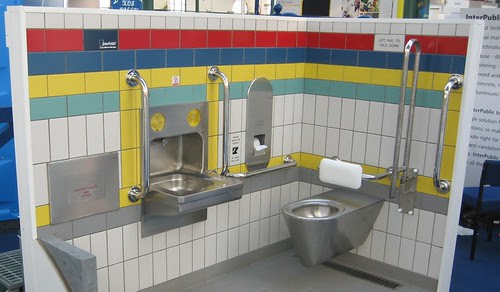 In the UK we have a bigger problem with vandalism, but that can be designed out as this life size model shows. I only wish the toilets on Virgin trains could be sorted out. 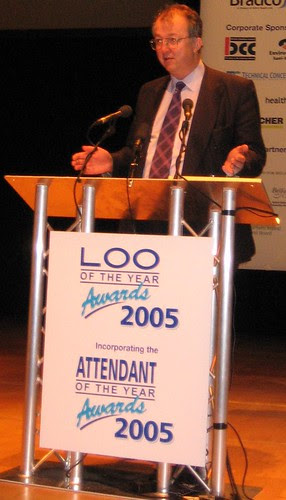 This is yours truly revealing the results of the most recent survey. Interestingly the Audit Commission in 1999/2000 decided public toilets weren't important enough to count them so stopped keeping records. 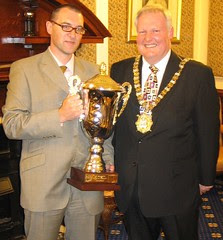 And here's the Lord Mayor of Belfast with the prize for "loo of the year".

To be fair to the British Toilet Association (which organised this summit which was platinum sponsored by Initial) their awards for good toilets are a good way of encouraging people to improve standards.

I do have some more pictures from the exhibition although the lighting in the conference itself was not good enough to take good pictures most of the time.

I have also collected some paramilitary mural pictures which I will upload when I get the time.

As well as there being something like 40 nations represented we had a government minister from Malaysia and the Mayor of Singapore. The next WTS is in Moscow.