October 26, 2010
The chart below is the current 10 year gilt yield chart from bloomberg. It looks back at what happened with gilt yields. As we went into the recesssion and there was an attempt to drive down interest rates the gilt yields followed. Then they popped up a bit and averaged around 4% going into the general election although there was a peak with a bit of extra uncertainty. Then they went down to the 3% level where they have remained.

We as a country are "in hock" to the markets because we borrow money from them. The only way to be less "in hock" is to borrow less.

The government's policies are in many ways traditional keynsian as there is not an attempt to remove the deficit overnight.

The Coalition Government's cuts are about of the same order of magnitude in fact as those initially proposed by Labour. They get rid of the deficit faster because of lower interest rates (1% on 1 tn is 10bn). Labour now appear to be arguing against any substantial cuts. That would clearly hit a sovereign debt crisis.

I still take the view that the urgent effort was needed to stop interest rates going up and the public finances spiraling out of control.

In retrospect we will be able to compare and constrast the different approaches between countries. I do not think, however, that there is any example of a a country which is spending its way out of cuts. 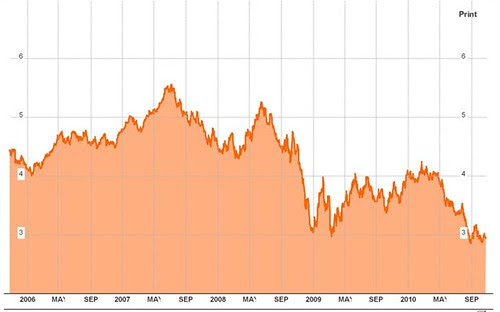 On what planet are this government's policies Keynesian?
4:37 pm