Ebola - controlling it in Africa is key

October 12, 2014
This chart from the BBC demonstrates clearly the problem with Ebola and the solution. 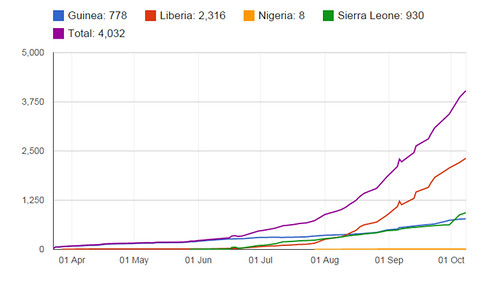 Ebola is, of course, a threat to everyone in the world. However, the chart demonstrates how Nigeria has kept tight control of infection whereas Liberia has been particularly bad at controlling infection (starting in 3rd place, but racing into 1st place).

It is important that we recognise that it is possible that an infected person from one of the infected countries (Sierra Leone, Senegal, Nigeria, The USA, Spain and Liberia) could come into the UK without us knowing that this is happening in advance.

It is, in fact, likely that an unidentified infected person will go somewhere else in the world. What is important is that we recognise what to do in the event that someone does come to the UK.

The key for people in the UK is the following (from the BBC):

Symptoms of Ebola include fever, headache, vomiting, diarrhoea and bleeding - but these are similar to more common infections like flu and some stomach bugs.
If you have these symptoms and have had contact with an Ebola patient,ring 111 first. Do not go directly to A&E or a GP.
If there has been no contact with Ebola, seek help from 111, your GP or A&E if necessary.
The chances of developing Ebola in the UK are low.
The solution from the chart is to ensure that the countries in Africa bring it under control by isolating victims. Symptomless victims are not that infectious.  Furthermore the infection cannot be transmitted in the air, but only through bodily fluids.

The second case of someone infected in the USA demonstrates that it is health care workers that are most at risk as the greatest risk of infection arises when infected people demonstrate symptoms.  That is why in the instructions above people who might have Ebola are asked not to go to A&E or their GP, but instead to phone for help.   Obviously someone who has been treating a patient with Ebola is at a high risk.

We will see from Spain how effectively Spain copes with the infection of an Ebola Nurse (Teresa Romero).  Their initial response was not good, but they  have isolated now 16 people who had contact with her and initial reports are good.

100 people have already been prevented from travelling through the screening at departure airports.  Although most had Malaria this is an essential step.  I also support the government's proposals to screen at arrival airports.  This may not identify any more people, but even if it only identified one at risk person that would help.  Furthermore it adds to the education process for people to be aware that Ebola is a possible infection.

We also need to look at whether a small period of quarantine or independent monitoring of contacts before travelling by air would also assist in preventing the spread of Ebola from the most infected three countries.   The difficulty, of course, is dealing with people who are travelling via other countries and obviously also those not travelling by air.

Happily the government are doing daily monitoring of travellers from Ebola countries. However, they are only monitoring the high risk individuals.  They should monitor all for 21 days with daily phone calls or texts.  That way would pick up quickly any cases that were missed.  It is in the interests both of the traveller and the UK for cases to be picked up as quickly as possible.

Unknown said…
If I get myself infected with Ibola and hopefully survive the treatment to what extent am I then immune?... would I be able to then offer myself as a carer without any of the need for protective gear which alienates the carer from the patient.
9:28 pm

John Hemming said…
Not an approach I would recommend with a 70% mortality rate.
8:49 am